"What, you see carrots? Or do you see bacon? I'm about to make carrot bacon," she proclaims in her buttery southern accent.

It was during a late-night escape into the TikTok-verse earlier this week that Brown's now viral account surfaced for me. After half an hour of scrolling through her feed, it became obvious that her content will—I swear—make the coronavirus pandemic a little lighter.

After drawing you in with her promise to make carrot bacon, Brown flips the camera and, with her long, neon-coloured nails front and centre, takes you through the steps: First, slice the carrots into paper thin strips; then, soak them in a dressing made of liquid smoke, maple syrup, garlic powder, smoked paprika, and onion powder with pepper; finally, roast the concoction at 380 F for five minutes.

"Take it out and, baby, you got some bacon," Brown says, before crunching on her crispy carrot bacon.

Brown has been sharing vegan recipes online for about three years and has 545,000 followers on Instagram and 11,000 on Twitter. Brown's 18-year-old daughter, Choyce, encouraged her mom to sign up for TikTok about five weeks ago in hopes of reaching a new audience. In that short time, the mouth-watering account has already amassed nearly 2 million followers, both vegans and non-vegans alike.

Brown said she transitioned into veganism in 2017. About a year and a half earlier, the mother of three started experiencing chronic headaches, coupled with fatigue. She lost her balance from time to time, and even lost her vision for a day. After about 19 months of feeling so ill she couldn't work, Brown sat down to watch What The Health, a polarizing pro-vegan Netflix documentary created by the same guys who made Cowspiracy. (While What The Health says people should eat more plants to prevent diseases like diabetes, the film faced criticism for only referencing health studies that support its more controversial arguments, including the idea that eating eggs is as bad for you as smoking.)

Brown thought, "I've tried all these drugs and they didn't work, so let me try (veganism) for 30 days." It took 10 days for her headaches to dissipate. It took 29 days for Brown to commit to the diet permanently. A week later, she was sharing her recipes online. Brown thanks her "Jesus Moment"—a string of dreams from God—for inspiring her to start sharing the vlogs.

"In the past, when I thought 'vegan,' I thought of white women who did yoga, or hippy women—who also did yoga," Brown said over FaceTime before breaking into laughter.

The reality is that viral vegan personalities are typically white—and give off an upper-class vibe. As a racialized vegan myself, I've spent countless hours scrolling through social media, seeking easy-to-make recipes. But it's disheartening to watch rich, white influencers tout recipes loaded with expensive ingredients like raw cashews, Reishi mushrooms, and $12 artisanal vegan cheese blocks that few people can afford.

As a Black woman, Brown said she wants to give veganism a better name, and to make sure people of colour see themselves reflected. 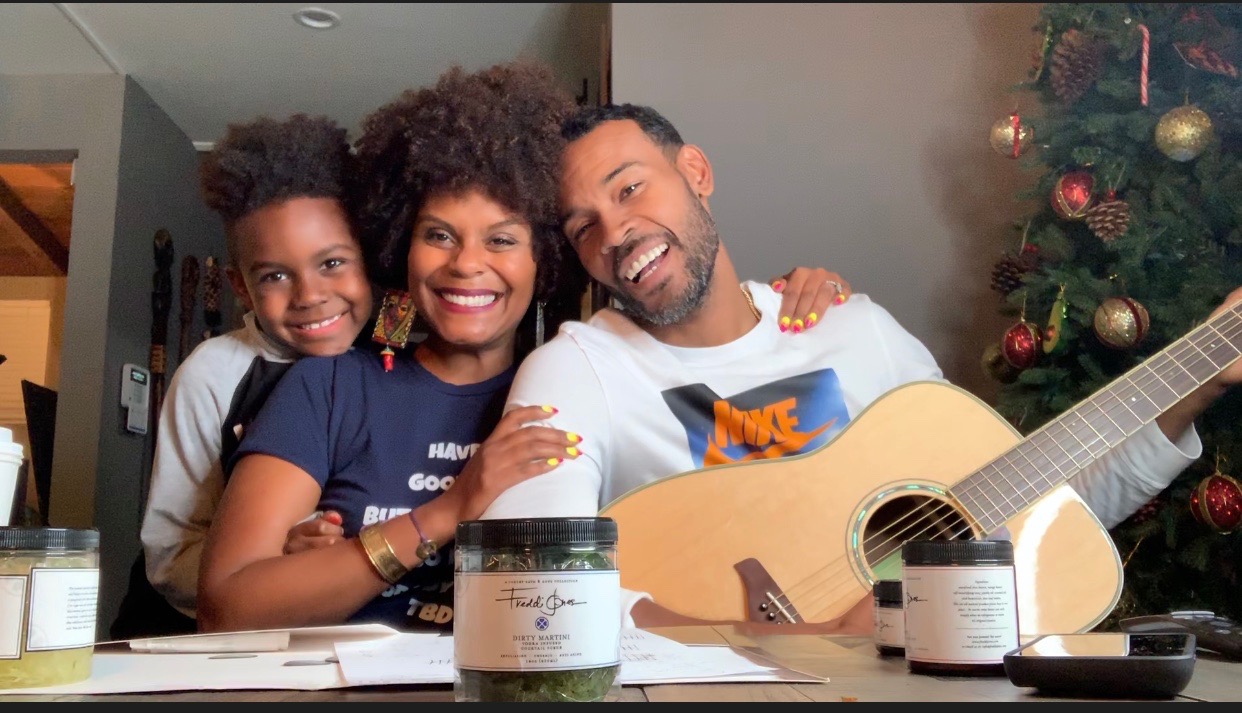 The way to make everyone feel included, Brown said, is to keep veganism "simple."

"Avocado toast will change your life—if you add a pickle on it. Oof, it's so good," Brown said. Another easy favourite? A slice of bread with vegan mayo, salt, pepper, and a slice of tomato.

"It's a Southern thing," Brown said.

Because I have a sweet tooth, I stan her super easy cinnamon banana raisin toast recipe. "Little known fact, I can't bite into a banana," Brown says at the onset of the TikTok. "I dunno. It gives me the heebie jeebies and I'm a texture person." Instead, she mashes razor thin slices of banana onto raisin bread, before frying it up with cinnamon.

Brown is originally from North Carolina, but moved to Los Angeles with her husband in 2004 to pursue an acting career. She worked on a lot of independent projects, television cameos, and straight-to-blockbuster movies, but she never got her "big break," Brown said.

It's clear her big break is happening now. Brown provides viewers with levity and emotional refuge at a time when life feels particularly heavy. A quick scan through Brown's mentions highlights just how strongly people are responding to her. Comments like "I just like listening to her talk"; "Truly the GOAT. Keep cooking and covering us with your warmth"; and "You literally are making this world we are in today a better place" consume her social media now.

"I get people coming up to me saying, "I feel like you love me!" Brown laughed. "And I do!"

Even starlet Keke Palmer interviewed Brown on Wednesday morning for a segment on the morning show Strahan, Sara & Keke. "I found (Brown's) page during this quarantine time and it has delighted me," Palmer told viewers.

Brown's allure also comes from her self-confidence. In almost every video, Brown reminds her audience they can improvise her recipes "because that's your business." Her laid-back approach runs in stark contrast to vegan bloggers who push the diet aggressively by appealing to guilt—"think about the cow before chowing down on your steak," for example. When cooking with Brown, it doesn't matter if you're a strict vegan or simply trying to perfect Meatless Monday; Brown said she just wants her fans to try something new, especially now while the pandemic rages on.

It's easy to feel completely out of control as public health officials around the world reinforce stringent physical distancing measures. But a charismatic cook telling everyone to make food the way they want becomes a radical reminder that there are ways to maintain day-to-day control, even now.

Maybe you can't go out for a beer with your friends, but you can add 10 strips of carrot bacon to your wrap, if you want to—because that's your business.