Real butter might be the thing I miss most since going vegan a few months ago. My search for a good substitute has been, well, depressing. Because despite being all about that vegan lifestyle, I'll be the first to admit: Vegan butter is kind of a bummer. Apparently a lot of people like these butter substitutes (or "buttery spreads"), but I bet you a million dollars every single one of them can believe it's not butter. Easily. Because it is overpriced, rebranded margarine.

But on the last big grocery store trip I made before New York City was scheduled to go into lockdown, I tossed a new vegan butter brand into my basket on the off chance it was actually good. The world is ending, I thought. What's seven more bucks wasted on another mediocre butter imposter?

While not all of the questionable choices I made paid off—the limoncello LaCroix is a no go—I'm pleased to report that my risky move in the dairy aisle resulted in one of the few pleasant surprises of quarantine: An amazing vegan butter. Miyoko's organic European-style cultured vegan butter ($8, Instacart) really does stand in a class of its own. Like, I can believe it's not b utter, yeah—but I could also be tricked into thinking otherwise.

First it passed the deceptively simple toast test, spreading smoothly like the Kerrygold of my dairy days. (It actually softens a bit faster than regular butter, which I appreciate. Who hasn't mutilated a piece of toast by mashing a slab of cold, hard butter into it?) The mouthfeel is rich and creamy; the taste salty, ever so slightly sweet, and a tad tangy. (The tanginess is thanks to cashew cream fermented with live cultures, simulating the fermented cream in regular cultured butter.) The fact that it comes in blocks wrapped in waxy paper, like real butter, is also a nice touch.

Next up: Baking. So I've been making a lot more baked goods than usual in the past few weeks—no particular reason or anything—and discovering a legit butter alternative that bakes up like a dream has been a game changer. Not to brag, but I am now flourishing in the sometimes-frustrating art of making vegan baked goods that don't taste vegan. Am I going to claim that spending a not-okay amount of money on a butter substitute in the midst of a pandemic has been essential to my mental health? Maybe? Yes? Can I do that? It's honestly been a tiny joy to rediscover the singular loveliness of butter that my baked goods have been missing. (It's safe to say the days of deluding myself into believing plain coconut oil is an adequate butter substitute are OVER.)

Now, I'm not a pastry chef, obviously—or someone who would even attempt to make, like, a croissant. But I have successfully whipped up delectable batches of a wide variety of tender, rich, and buttery A.F. vegan baked goods: almond-flour sugar cookies, cornbread, buckwheat scones, something sort of resembling blondies, date-coconut-pecan-oat bars, cornmeal pancakes, blueberry flax muffins, and chocolate chip cookies that I would definitely serve to company, if having company was a thing anymore. (Note: I feel obligated to clarify that I have actually never once in my life "had company" and served those people homemade cookies.)

Last but not least, the claim I was most skeptical of: That Miyoko's browns like real butter. What kind of molecular wizardry could make vegan butter brownable? I still don't know the answer to that question, actually. But after a few minutes on the stovetop, the butter indeed turned a beautiful shade of golden brown and blessed my kitchen with that familiar nutty fragrance. Heaven. Oh, and the browned-butter sage pasta tasted like the real thing too. Next up: Banana bread, obviously. 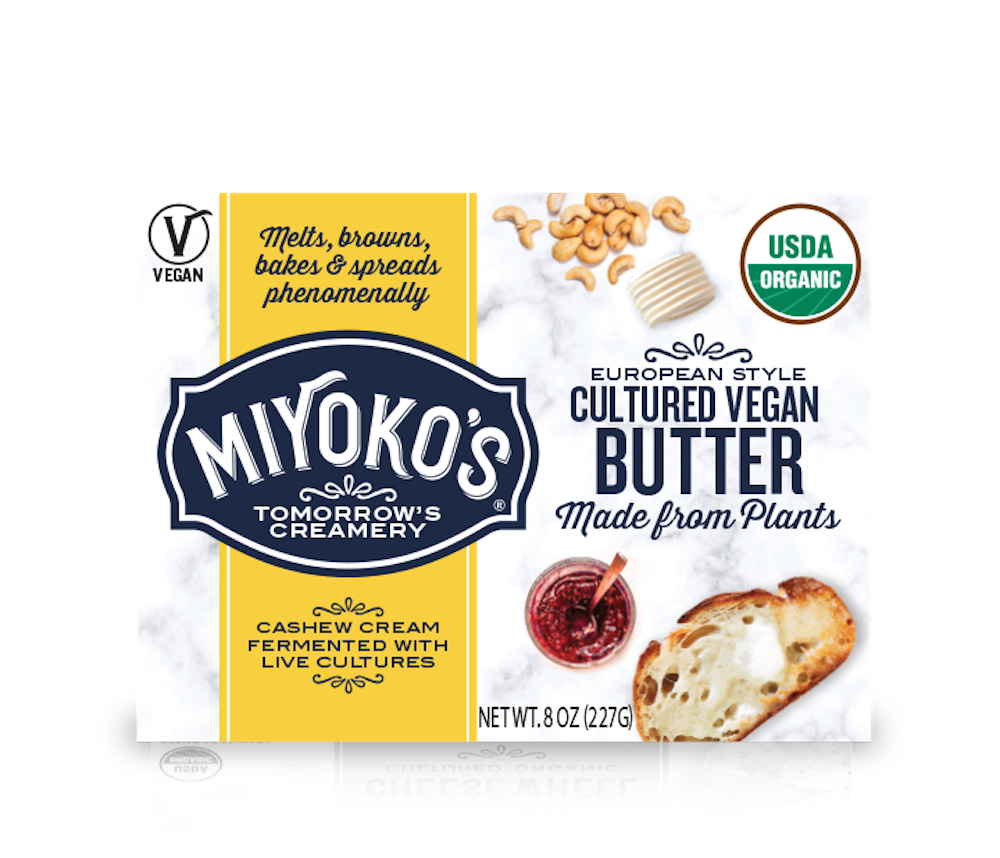 This plant-based butter substitute, made with coconut oil and cultured cashew cream, comes in 8-oz blocks suited for spreading, cooking, and baking.